The Durban FilmMart Institute is pleased to announce that the 11th Durban FilmMart virtual edition reached its halfway mark on Tuesday, 8 September with 1057 delegates registered. 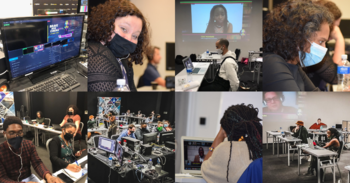 “Our film co-production and finance market, through this edition has made its mark in solidifying its position as the most important platform on the continent for development and birthing of the content for African cinema,” says Head of the Durban FilmMart, Toni Monty. “We made a bold call to go virtual this year and not wait for a post-pandemic physical event. This call was indeed heard by the industry as they have come out in full force to robustly engage with each other in this virtual space.”

Since Friday, 4 September the market has offered filmmakers from around the globe, representing 66 countries, including 32 African countries, 13 of which were French-speaking African countries, opportunities to engage in relevant discussions about the state of the industry, the future of film in Africa, and to learn from experienced film experts and share knowledge.

The event was streamed live from a production hub in Durban,where 75 different sessions by 170 speakers and panellists with 24 moderators, was broadcast to an accumulative audience of 5995 people using 50 gigs of data. In addition, the team recorded an incredible 75 hours of webinars and “hangouts” and presented pitches by 69 African filmmakers to financiers, investors, sales agents, and international markets.

“These numbers are certainly impressive, and if there was one good thing to have evolved out of this is the necessity to rethink the way of doing the business of film. The virtual edition has drawn key role players to “Durban” to discuss, plan, unpack, and find ways forward for the industry. It has exposed emerging filmmakers and talent to experienced ones, provided benchmarking, and stimulated much creative thinking,” says Monty.

Whilst the live streaming ended yesterday, the content from most of the panel discussions, presentations, and all the pitches are still up for viewing on the virtual event platform and available until 30 September for registered delegates.

The 69 projects that have been pitched to panels are currently taking meetings with potential investors, producers, financiers, and markets, and on Sunday 13 September at 3pm the official awards will be live streamed. These prizes include finance packages or opportunities to pitch at international markets, which enable the projects to develop further.

For more information go to wwww.durbanfilmmart.com